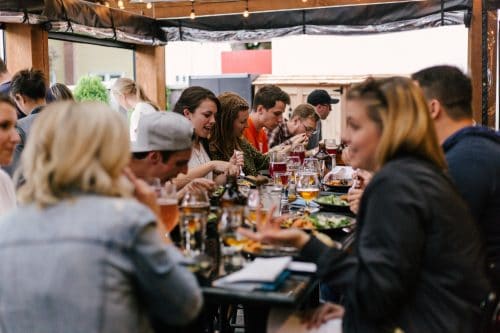 Earlier this year, I read the book The Art of Gathering: How We Meet and Why It Matters, by Priya Parker and wrote a blog post about it.

I so enjoyed what I learned from this book that I was inspired to seek an interview with the author, and the Q&A was published on September 27, 2019, on Next Avenue.

Recently, I had a chance to put one of the teachings — about elevating conversations — into practice.

On a recent Saturday night, my husband, David, and I went out with another couple to dinner and a play. That afternoon, I decided to think up some new questions to ask, to make the evening more meaningful.

I had a hard time coming up with ideas, so I checked Google. I found a post titled 200 questions to get to know someone which included some great conversation starters.

I’ve learned from experience that it helps to give advance notice when we might be changing the conversation. Starting more meaningful conversations is a new concept to many, and it can be a little intimidating. Giving people time to think about it helps them become more open.

The first person I needed to alert about wanting to change the conversation was David. He agreed, and then I needed to discuss this with the other couple.

As we drove to dinner together, I told the couple that I’d like us to catch up on each other’s lives, but that I also had something fun we could do, in the form of some unique conversation starters.

My friend said, “Ok, but I want to hear about your husband’s new job first.” This was the perfect segue. We were able to talk about David’s job, our kids, parents, etc. during the car ride and in the early part of our meals. Then I brought out my phone to look at the list of questions.

Ask and Ye Shall Receive

I had read through the questions earlier and chosen a few that I thought would be good. The list was organized well, starting with general questions that would be great for people you just met, including:

To some “very personal questions to get to know someone better”:

Luckily, there were many questions in-between these, and here are the ones I asked:

A few weeks later, I’m still thinking about the questions and answers that we shared.

My favorite question was about the annoying roommate. My friend’s husband has a habit that would have been a deal-breaker in my marriage and made me feel better about my husband!

When David shared the personality traits that he valued most and disliked the most, I was surprised. It triggered an immediate understanding of the way I needed to change some of our interactions. After 25 years of marriage, I learned this from a fun conversation starter!

The four of us enjoyed a great dinner and play and got to catch up.

We also learned more about each other and had some interesting conversations, which led to deeper connections. The evening was much more meaningful than a typical night out with friends.

How have you changed the conversation to make your interactions more meaningful?