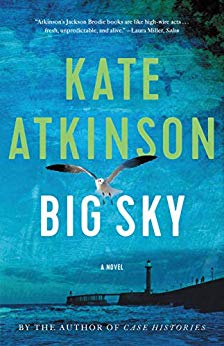 Sometimes a good book can be even better than a delicious dessert!

I love reading, and also enjoy sharing my finds.

While I read hundreds of books this year, here are my favorite books published in 2019.

This is the fifth book in a series featuring Jackson Brodie, a private investigator.

The books in this series are different from some of Kate Atkinson’s other books that I also enjoyed, such as Life After Life.

I hadn’t read any of the books in the series prior to reading this, and I enjoyed it tremendously. Atkinson has a way of writing that is so charming and funny, and so real, that I literally hang on every word.

While this book has some great plot lines, the characters are also terrific. The book begins with Jackson Brodie relocating to a quiet seaside village, spending time with his teenage son and an aging dog. He stumbles upon a mystery, and it’s a doozy.

I loved this book so much that I just re-read it — and I read it for the first time five months ago!

I’m currently reading the third book in the Jackson Brodie series — When Will There Be Good News? — and I’m really enjoying that as well.

Strout’s first novel about Olive — Olive Kittredge — was published in 2008 and won the Pulitzer Prize. Olive, Again was published this year, and it’s already one of Oprah’s Book Club picks.

In the new novel, Olive Kittredge is back. She’s still feisty, but she’s older and more open-minded.

Throughout the book, Olive encounters all kinds of characters and situations. From her late-in-life love interest to helping teenagers, a pregnant woman, or a nun, Olive’s brutal honesty tempered with empathy made me laugh and cry.

Watching Olive grow and change while reading the stories of how she touches others’ lives makes for fantastic reading.

3. The Song of the Jade Lily, by Kristy Manning

I love reading about cultures and places I didn’t know about. Don’t you?

The historical part of this novel tells the little-known story of Jewish refugees who fled to Shanghai during WWII (Who knew? Not me!).

In 1939, two young Jewish refugees meet in Shanghai and become friends. The war forces them apart, and they end up living very different lives.

The other part of the novel tells the story of Alexandra, who returns to Australia to be with her dying grandfather. Alexandra learns family secrets that tie into her grandmother’s past in Shanghai.

The combination of drama and learning about Jewish refugees who fled to Shanghai during WWII make this the perfect book club book.

4. The Testaments (the sequel to The Handmaid’s Tale), by Margaret Atwood

I remember reading The Handmaid’s Tale in college and being blown away. If you haven’t read that book, seen the movie or watched the Hulu series, The Handmaid’s Tale is about a world where men take over and women have no rights. It’s written from the perspective of a “handmaid,” who exists to bear a child of a high-level commander, whose wife can no longer bear children.

The Testaments was published 34 years later, and the story takes place more than fifteen years after the events in The Handmaid’s Tale. Men still rule the Republic of Gilead, but there are major problems in the regime. By telling the stories of three women affected by Gilead, and how their lives converge, Atwood leads the reader to the shocking conclusion.

This novel answered questions from the first book and wrapped everything up nicely at the end. It’s another great book club pick.

I decided to read this after it was announced as Jenna’s Today Show Book Club pick.

I love a good mystery, and this one is big.

Sylvie is the beautiful, older daughter of the Lee family. She flies to the Netherlands to visit her dying grandmother and then disappears.

Amy, the younger, shy sister, narrates the story, and we learn that while she grew up with her mother and father, Sylvie was raised by distant relatives in another country because her parents couldn’t afford to keep her. When Sylvie goes missing, it’s up to Amy to step up and help the sister who has always taken care of herself. She shares details about their lives as she searches for Sylvie.

There are some twists, along with a great plot and sympathetic characters. I also learned about different cultures and countries. This was a great read.

This book won a bunch of awards and is very interesting.

It takes place in Russia, and again, I learned some new things.

The book is about two sisters — eight and eleven — who go missing on the Kamchatka peninsula at the northeastern edge of Russia.

Over the year-long search for the girls, we learn about some of the area’s characters who are connected to the crime. The novel also features beautiful detail about Kamchatka — forests, open land, volcanoes, and seas.

The ending was unexpected and the perfect conclusion to a great novel.

7. Once Upon a River, by Diane Setterfield

This is not the type of novel I would typically pick up, but I really enjoyed it.

“On a dark midwinter’s night in an ancient inn on the river Thames, an extraordinary event takes place. The regulars are telling stories to while away the dark hours when the door bursts open on a grievously wounded stranger. In his arms is the lifeless body of a small child. Hours later, the girl stirs, takes a breath and returns to life. Is it a miracle? Is it magic? Or can science provide an explanation? These questions have many answers, some of them quite dark indeed.

“Those who dwell on the river bank apply all their ingenuity to solving the puzzle of the girl who died and lived again, yet as the days pass the mystery only deepens. The child herself is mute and unable to answer the essential questions: Who is she? Where did she come from? And to whom does she belong? But answers proliferate nonetheless.

“Three families are keen to claim her. A wealthy young mother knows the girl is her kidnapped daughter, missing for two years. A farming family reeling from the discovery of their son’s secret liaison stands ready to welcome their granddaughter. The parson’s housekeeper, humble and isolated, sees in the child the image of her younger sister. But the return of a lost child is not without complications and no matter how heartbreaking the past losses, no matter how precious the child herself, this girl cannot be everyone’s. Each family has mysteries of its own, and many secrets must be revealed before the girl’s identity can be known.”

This book offers a great plot, interesting characters, and a unique setting.

8. Us Against You, by Fredrik Backman

One of my favorite books of all time (A Man Called Ove) was written by this author.

This book is also wonderful.

As the sequel to Beartown, this novel continues the story of the small community of Beartown, which lives and dies by its local ice hockey team.

When the town finds out that the Beartown ice hockey team might soon be disbanded, tensions rise between Beartown and the neighboring community of Hed, which has a hockey team. Then a newcomer arrives who offers the team a surprising new coach and a chance at a comeback.

As the Beartown team comes together, some bonds break and new ones are formed. The Beartown and Hed rivalry deepens and a tragedy occurs.

The characters in this novel are so well-developed and interesting. Even if you’re not a hockey fan, you’ll love this book.

9. Out of the Dark, by Gregg Hurwitz

I read so many books that I rarely buy them. I generally get ebooks and printed books from the library.

After reading and enjoying the first three books in the Orphan X series, I was desperate to read this book. I got tired of waiting on my library hold list, so I bought it. And I’m so glad I did!

Evan Smoak was taken from a group home at age twelve and was raised and trained as part of the Orphan Program, a covert team of assassins. When he decided to leave the program, he used everything he learned to disappear. He then decides to reinvent himself as the Nowhere Man, a man who helps the truly desperate when no one else can.

While he’s helping others, he’s also avoiding getting killed. Someone at the very highest level of government has been trying to destroy every trace of the Orphan Program by killing all the remaining Orphans and their trainers.

You’ll be rooting for Orphan X while enjoying this ride. If you like thrillers, you’ll love this book!

So grab these titles and dig into some great stories. And be sure to let us know what you think!