Home » Blog » What I Learned About Aging, Fitness, and Life From the “Iron Nun”

What I Learned About Aging, Fitness, and Life From the “Iron Nun” 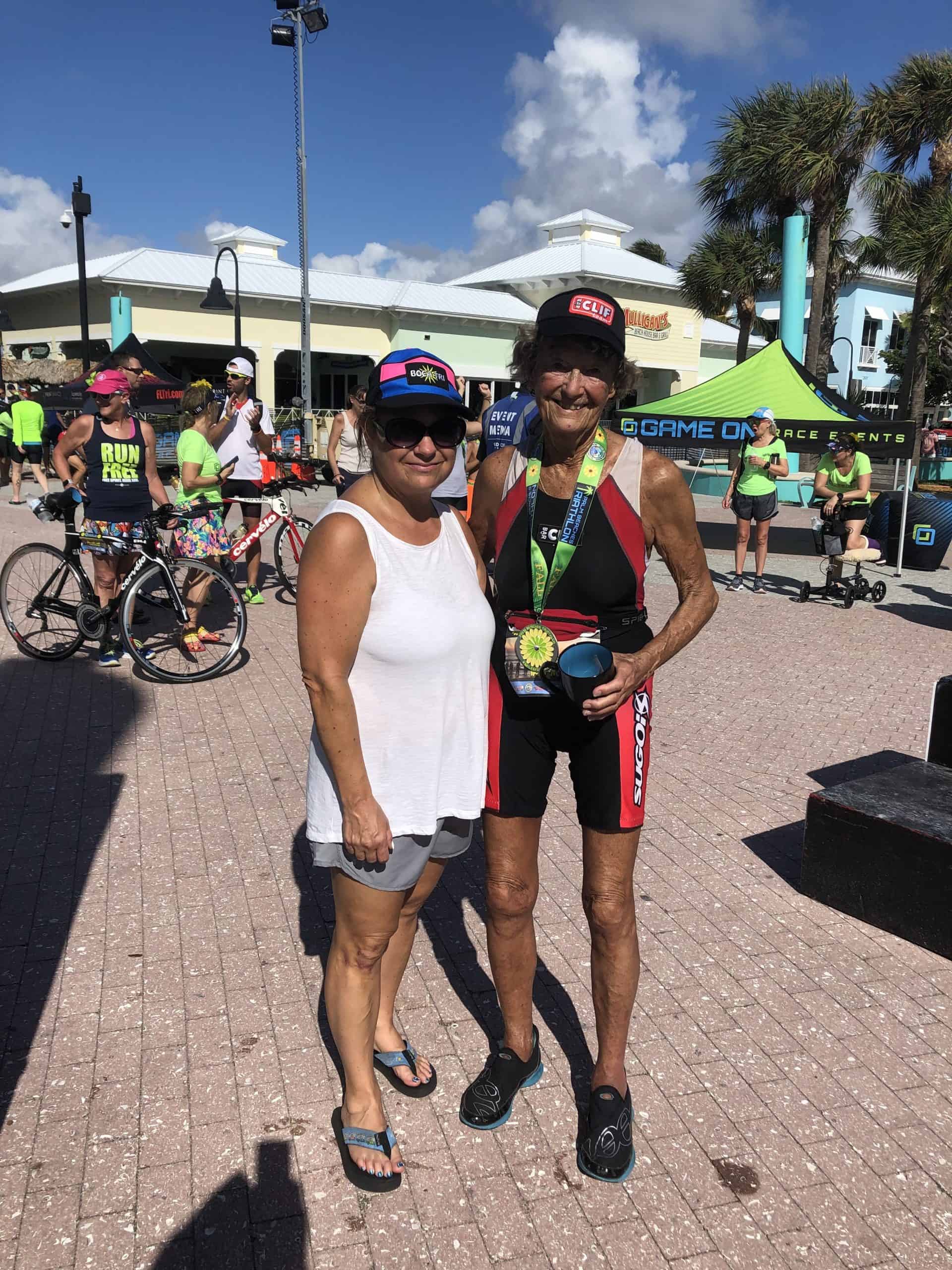 So … a 52-year-old Jewish mother meets an 89-year-old nun at a triathlon … sounds kind of like the start of a joke, right?

Except it’s not. I’m the Jewish mom, and Sister Madonna Buder is the nun.

We were on different paths in life, and yet our paths converged. Here’s how it happened, and what I learned.

My journey started at age 49. Like many others, I was depressed thinking about hitting the big Five-0. My husband asked me how I wanted to celebrate, but I wasn’t in the mood. No parties or trips for me. After much thought, I realized that what I most enjoyed were fun experiences. So I decided that during my fiftieth year, I wanted to have a new experience each month with friends and loved ones.

One of the experiences on my list was to run a 5K race, which is 3.1 miles. I’d never been a good runner (or any type of runner for that matter), but I had always wanted to do a 5K to prove to myself that I could. A friend of mine had run many races, and I asked her to be my coach and companion. She did, and we ran the 5K. A few months later she mentioned that she was doing a triathlon, and asked if I wanted to do one, too. At 52, I finished my first triathlon, and I was hooked.

If you’re not familiar with triathlons, they’re events that include swimming, bicycling, and running, in that order. The shortest triathlons are sprint triathlons, which include a quarter-mile swim, a 10-mile bicycle ride, and a 3.1-mile run.

One day I was scrolling through the Boca Raton Triathletes Facebook page and noticed a posting about the “Iron Nun.” Sister Madonna Buder was 89 years old and would be traveling from her home in Spokane, WA to participate in an upcoming triathlon in South Florida, in memory of a local triathlete who had died tragically a few months before.

As a new triathlete, I was amazed by the fact that an 89-year-old woman was doing triathlons. I didn’t know what the term “Iron Nun” meant, but I was eager to find out, so I did some research.

Sister Madonna was a champion equestrian as a teenager, but sports took a back seat to her faith when she became a nun at 23. She had never been a runner until one day when she was almost 48.

During a conversation between Sister Madonna and a priest, Father John Topel, he mentioned that running had many benefits, including a way “to harmonize mind, body, and soul.”

That night Sister Madonna found a pair of running shorts in a donation bin and put on a pair of secondhand tennis shoes given to her. She ran half a mile in five minutes, and when she told Father Topel, he said, “Good. You must keep it up now!”

Five weeks after her first run, Sister Madonna completed an 8.2-mile race. She eventually ran the Boston Marathon and other races. When she started to get bored with running, a running buddy suggested triathlons.

Sister Madonna started with one sprint triathlon, then worked up to a half-IRONMAN and then the full IRONMAN distance, where she gained the title the “Iron Nun.”

If you don’t know what an IRONMAN is, prepare to be impressed. An IRONMAN Triathlon is a long-distance triathlon consisting of a 2.4-mile (3.86 km) swim, a 112-mile (180.25 km) bicycle ride and a marathon 26.22-mile (42.20 km) run, raced in that order. It is generally considered one of the most difficult one-day sporting events in the world. Less than .01% of the world’s population has ever finished an IRONMAN.

Sister Madonna has competed in over 380 triathlons including 45 IRONMAN races, all while she was over 50 years old. She created six new age group categories for the IRONMAN distance, including women 80 and over.

She holds the current world record for the oldest woman to ever finish an IRONMAN Triathlon, at age 82.

Sister Madonna was even featured in a Nike Ad in 2016. I watched it on YouTube, and it’s really inspiring. You can see it here.

She has stated that her purpose (which she realized after age 50) is to provide inspiration for others, through running and doing triathlons at an older age.

While the “Iron Nun” has had many achievements, they have not come without difficulty.

“When I first took up running, my newfound joy was not supported by the sisters I lived with, who considered this undertaking inappropriate for a nun.”

Sister Madonna sees it differently. “Running is a gift I received from God, and when He gives you a gift, you are expected to use it.”

In 1990 she joined 38 other Sisters in a newly-established, non-traditional community of Sisters called the Sisters for Christian Community, which is independent of the authority of the Roman Catholic Church. Sister Madonna has had the freedom to choose her own ministry and lifestyle. She has the ability to train for triathlons while still practicing her vows of poverty, chastity, and obedience. She continues to visit those in jail and has also worked with the disadvantaged.

As a consequence of her physical activity, Sister Madonna has also endured injuries. She’s been hit by cars, and broken a hip, femur, ribs, and more.

In 2014, she had three major accidents within a 16-month period. The second resulted in a torn meniscus. The doctor recommended surgery, but Sister Madonna declined, and prayed, “God, help me do my best, and you do the rest.” She uses this prayer often and shares it with others.

Her vow of poverty would typically make competing in triathlons impossible. Triathlons can be expensive. They require equipment, entry fees, and travel expenses. Sister Madonna leaves everything up to God and considers herself fortunate to have been given equipment by others, including donations from companies that make the equipment. Many triathlons waive their fees for her. And she often sleeps at the houses of friends and triathlon participants when she travels.

After doing my research, I decided that I had to meet Sister Madonna at the South Florida triathlon.

Before I met her, I was a little nervous. After all, she was a nun. I wasn’t sure what to expect. I had met only one nun, and that was back in college (Boston College is a Jesuit school), and most of the nuns in movies and on TV seem pretty intimidating.

My first impression of Sister Madonna: long, lean, and as nice as can be.

I asked her to tell me her thoughts about aging and fitness.

“Most people in their 50s and over are not in good health,” says Sister Madonna. “It makes me feel very grateful to be doing triathlons at my age.”

Exercise is always a part of her daily life. Sister Madonna jumpstarts each day by running to Mass. She also swims year-round in an indoor pool and runs and bikes outside the rest of the year, weather permitting.

After our interview, I read Sister Madonna’s book (a memoir published in 2010) and continued to research her.

While she is certainly unique, and incredibly inspiring, there are lessons we can learn from her, especially those of us in the second half of our lives:

Sister Madonna was once asked how she keeps on “keeping on.” Her answer: “The spirit nourishes willpower and provides determination.”

The “Iron Nun” shows us that no matter what our age, it is ultimately our spirit that helps us move forward and be the best we can be.