Home » Blog » What I Learned From Stacey

What I Learned From Stacey 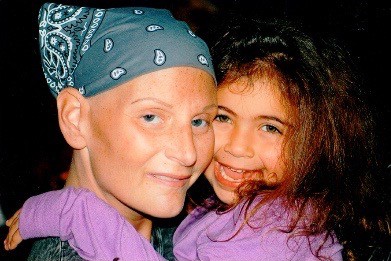 February 13 is my sister-in-law Stacey’s birthday.

She died in 2008, at the age of 39, from breast cancer. Stacey was a wonderful person and is terribly missed by all of us.

My daughter Zoe was only four and a half when Stacey passed, but she still remembers her aunt fondly. Zoe chose to celebrate her Bat Mitzvah on February 13, 2016, to honor Stacey’s memory.

I was inspired to write about Stacey the day she died. For those of you who are dealing with grief, I hope this gives you some comfort. Here is what I wrote:

“My sister-in-law Stacey was always larger than life. Literally. She was a big girl, with a big personality. Always running to meet friends and do stuff. It’s not fair that Stacey was taken from us at 39. How can someone so much larger than life not be alive?

The last time I saw her was the day before her death. She was a shell of herself, skinny and in constant pain. I remember her telling me a few months earlier that she had always wanted to be thin. But not this way.

Throughout her illness, Stacey and I grew closer. It’s not that she needed more friends. No one had more friends than Stacey. It’s something I asked her about that last day. “How do you have so many friends?” I asked, hoping to learn her secret. But she was in too much pain to answer.

Whenever I called or visited, there were always friends with Stacey, at home or during one of her frequent hospital stays.

I have had time to think about it, and I think I know why Stacey had so many friends.

It’s because she was a friend, a good friend, to everyone around her. I remember, even during her sickness, her friends would call, and she would be there for them, offering advice and a sounding board.

Her way of being will live on. I always called her the mediator, because she couldn’t stand it if people she loved, friends or family, were fighting or didn’t get along. She was always trying to get people to love each other.

That’s why it was so easy to love her.

Stacey often said that Zoe was just like her, with lots of friends and the desire to have people around her all the time.

I agree. Stacey will live on in our memories, and through Zoe’s love of life, friends and family.

It’s something that Stacey and Zoe teach me every day.”

Today would have been Stacey’s 50th birthday. It’s an honor to welcome her into the ranks of 50-year-old mermaids.